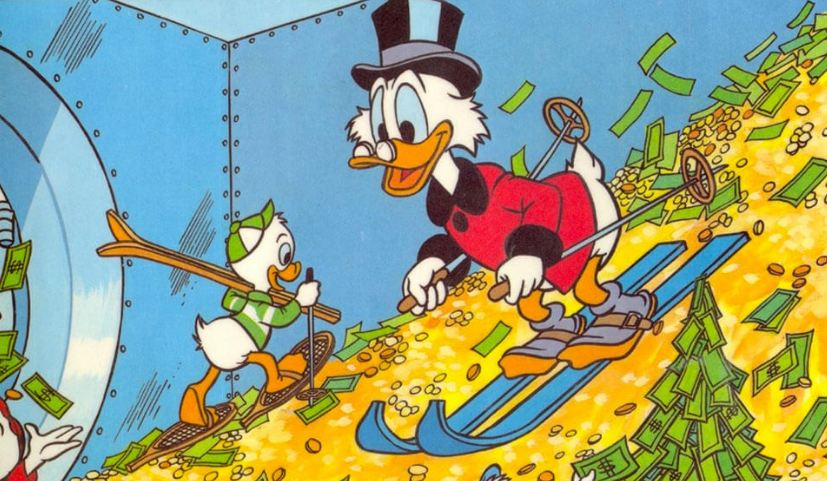 Scrooge McDuck is a very famous fictional cartoon character. Carl Barks created this character. Scrooge is the miser and rich maternal uncle of Donald Duck. He is best known as ‘Uncle Scrooge.’ He is one of the most famous and appreciable Disney characters. Keep reading to understand more about the net worth of Scrooge McDuck in 2020.

Scrooge McDuck’s character was created in the year 1947. Carl Barks made this while serving in ‘The Walt Disney Company.’ Scrooge’s character was named after ‘Ebenezer Scrooge’ from the novel ‘A Christmas Carol.’ This character first appeared in the comic ‘Four Color’ story ‘Christmas on Bear Mountain.’ Huey, Dewey, and Louie are his three grandnephews.

Although an antihero at first, Scrooge McDuck later became a greedy miser. Later he was portrayed as an economical and charitable hero. In 1987, the animated series ‘Duck Tales’ was premiered. In this series, Scrooge’s character got the most significant role.

The center of interest of the ‘Duck’ stories was shifted to Scrooge from Donald in the story ‘The Magic Hourglass’ in 1950. In this story, Scrooge’s character hd some positivity to it. His role was much lengthier in this one. In 1951, ‘A Financial Table’ was published. In this story, Scrooge was shown to teach some lessons to Donald about productivity and the laws of demand and supply. As the story went on, the bonding between Scrooge and his three grandnephews became stronger.

Scrooge’s famous ‘Money Bin’ was introduced in the story of ‘The Big Bin on Killmotor Hill.’ At this point of time, Scrooge became very popular among the readers of Europe and U.S. Later Don Rosa wrote a ‘Comic Book Series’ named ‘The Life and Times of Scrooge McDuck’ on the life of Scrooge. Scrooge’s character was recently seen in Mickey Mouse’s story ‘Goofy’s First Love’ in 2015.

Scrooge’s character gained massive popularity with time. One of the most famous Italian Disney writers Romano Scarpa used Scrooge’s role in his Disney stories. In fact, many other Disney artists and writers started using the character in their own stories. In 1986, Don Rosa’s novel ‘The Son of the Sun’ was released by ‘Gladstone Publishing.’ This story was nominated for ‘Harvey Award,’ which is one of the highest honors of the comics industry. Don Rosa’s book ‘The Life and Times of Scrooge McDuck’ won ‘Eisner Award’ in 1995. Don Rosa remains the top-tier fellow Duck artist of all time.

Scrooge McDuck has made to the list of ‘Forbes Fictional 15’. As of now, Scrooge McDuck has an estimated net worth of $70 billion. He is the richest Duck in the world. Scrooge has appeared in several video games. He had made cameo roles in various comic series like 1950’s ‘Mickey Mouse Club,’ an episode of the television series ‘Darkwing Duck.’ The name of the episode is ‘Tiff of the Titans.’ Scrooge is seen in many Disney parks too. The greatest lesson that a reader can learn from Uncle Scrooge is never to earn money illegally.

Scrooge McDuck is a historical character from Walt Disney. It is very relatable and has been the favourite of kids from decades and will continue to be one in the future as well.