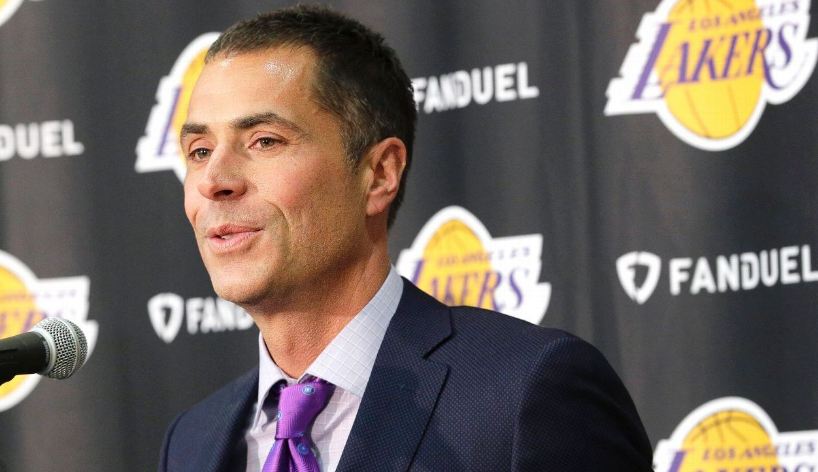 Rob Pelinka is a famous NBA sports agent, a former college basketball player and a lawyer from America. He is currently serving as the ‘Los Angeles Lakers’ manager. Here is a quick summary of the net worth, career and earnings of Rob Pelinka in the year 2019.

Robert Todd Pelinka Jr was born on December 23rd, 1969 in California, USA. His father, Robert Todd Pelinka Sr is a retired high school basketball coach. Rob started his studies at the Lake Forest High School and later went to Michigan for his college education. He enrolled at the School of Business Administration for a Bachelor of Business Administration.

In 1993, he joined the University of Michigan Law School and later the School of Law at the Northwestern University. He had been playing basketball through high school and college, but he decided to become a lawyer after his graduation.

Rob Pelinka is married to a paediatrician by the name of Kristin Pelinka. She is a graduate from the Duke University and UCLA’s medical school. The lovely couple has two young children. Rob and Kristin are active members Christian group at St. Andrews Presbyterian Church. Together with their children, they are volunteers at a camp that caters to children with life-threatening illnesses known as The Turtle Camp.

Rob started his career as a basketball player while still in high school. He later joined ‘Wolverines’ team at Michigan University where he was able to reach 3 NCAA Tournament Finals Four. He was the Co-Captain of the ‘Fab Five’ team in 1992-93.

He got his license to practice as a lawyer in 1996and he started working with Mayer Brown. He then became a lawyer for ‘SFX’ management, and he held that position for only two years and became an agent. He represented various players who had come from high school to NBA. His client included Kobe Bryant, Tracy McGrady among others.

Pelinka later founded his own company ‘The Landmark Sports Agency’ that he still runs to date. He has represented players like Chris Kaman, Julian Wright, Derrick William, Buddy Hield, James Harden among others who were all first-round lottery picks.

His agency currently represents over 25 players. They include Morris Peterson, Andre Iguodala, Sasha Vujacic, Keyon Dooling among others.

As a player, Pelinka was honored with a Walter Byers Scholarship in the year 1993. He joined the Los Angeles Lakers as their general manager on 7th March 2017.

The estimated net worth of this former player is $15 Million. He got part of his wealth as a professional player. He also made much more working as an agent. His wealth is expected to increase a lot as he will be managing the Lakers in the next five years.

Rob Pelinka holds many titles as he was formally known as a player than an agent and now he is a manager. All this achievement has come as a result of his dedication and hard work. He has managed to move to the top of his sporting career over the years. We hope for much more from him.