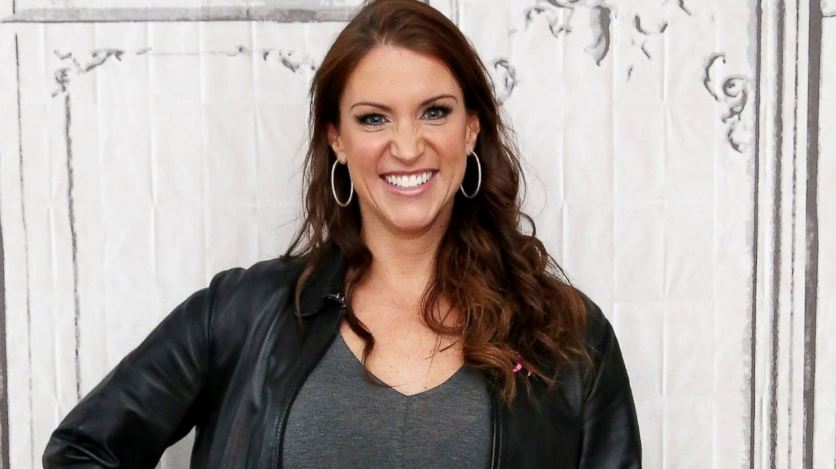 Stephanie McMahon is an American businesswoman who is a professional wrestling personality and the Chief Brand Officer (CBO) of WWE. She started working for WWE since she was a young girl and worked her way up from receptionist to the position of CBO. She is the daughter of WWE Chairman and CEO Vince McMahon. Her mother Linda McMahon was the CEO of WWE. Her elder brother Shane McMahon is a part owner of WWE. Stephanie is married to WWE wrestler Paul “Triple H” Levesque.

Stephanie McMahon was born on September 24, 1976, in Hartford, Connecticut. Her parents Linda and Vince McMahon moved to Greenwich. She attended the Greenwich Country Day School. When she was 13, she appeared in World Wrestling Federation merchandise catalogues which included T-shirts and hats.

In 1994, she graduated and joined Boston University, from where she got a degree in Communications in 1998. Thereafter she began working full-time for the WWF, which was later renamed as WWE.

In 2000, McMahon started dating Paul Levesque, also known as Triple H, who was a star wrestler for WWE. Their dating initially as “on-screen” and meant to continue the storyline of WWE and keep the audience hooked. However, they also got romantically involved in real life. They got married on October 25, 2003, in a Roman Catholic ceremony at a church in New York. Stephanie adopted her husband’s surname. They have three daughters.

Stephanie and her family have Irish-American roots as her forefathers emigrated from Galway, Ireland to the USA in the 1870s.

McMahon started her career, after getting her degree, with WWF as an Account Executive in the New York office. She did a variety of assignments such as reception work, creative design, television production etc. She was also a ring performer.

In 2002 she became the director of creative writing. Four years later, in 2006, she was promoted to Senior Vice President of Creative Writing. In 2007 she was promoted to executive vice president of Creative. She looked after the creative process like storylines for all television and pay-per-view programs. She also supervised talent management, branding, live event booking and marketing; besides taking care of media and promotions.

She launched a WWE app, which was downloaded over 20 million times. She partnered with the USO Metropolitan Washington, the social media company Tout, and Yahoo to promote WWE content. She was also responsible for the WWE.com website.

In 2013, McMahon was promoted to the position of Chief Brand Officer. Her brief was to further enhance WWE’s brand reputation and to serve as the lead ambassador of WWE.

In 2014 McMahon announced a partnership between WWE and KaBOOM! to build a playground for WWE’s annual WrestleMania week in Louisiana. That year she also announced a new WWE logo.

In early 1999, there was an on-screen storyline which involved the Undertaker to stalk and abduct McMahon, and to almost marrying her in the middle of the ring, before being rescued by Stone Cold Steve Austin. According to the on-screen script, McMahon began a relationship with wrestler Test. Then McMahon and Test teamed together and defeated Jeff Jarrett and Debra. They were engaged on-screen and just before marriage Triple H arrives on the scene.

In 1999, Triple H and McMahon became the on-screen owners of the WWF, which is known as McMahon-Helmsley Era. Triple H held the WWF Championship while McMahon held the WWF Women’s Championship. In 2000 Triple H defend his title against The Rock. The on-screen story continued to show the conspiracy in WWE and keeping the audience hooked. On screen, they also had a divorce. Later Triple H wins the Royal Rumble.

In 2002, McMahon returned to the WWE as the general manager of SmackDown, and also brought back Hulk Hogan. Also, in response to a lawsuit by World Wildlife Fund, the name of WWF was changed to WWE.

Later in 2013, McMahon returned to regular on-air appearances in the WWE. She played the role of a bullying owner and her real husband Triple H played on-screen CEO. They played the role of a power-couple, calling themselves the Authority. They indulged in shady deals on-screen for the sake of business. Of course, these on-screen stories were created just to keep the audiences interested and to create a buzz around WWE.

Stephanie McMahon’s Net Worth & Salary in 2022

McMahon has proved to a shrewd businesswoman and is quite rich as she had been earning a combined salary of over $775,000 from 2013 onwards. Earlier she had received a salary of $500,000 per year as the company’s Chief Brand Officer. She has also signed a 3-year deal as an in-ring performer for $325,000 per year.

She also owns more than $77 million of WWE shares. Her net worth including the value of her shares and other assets is estimated to be over $90 million as of 2022.

The WWE brand and the company is the property of the McMahon family. To make the events of WWE interesting on-screen stories are promoted. McMahon as brand commissioner of the Raw brand has made several events of the WWE a successful commercial venture. Along with her elder brother Shane, she is the heir to the WWE empire and has brought her husband Triple H as an insider. Stephanie McMahon was very clear about her aim to make WWE a foremost brand in live entertainment shows. She has succeeded in making WWE an iconic live show.