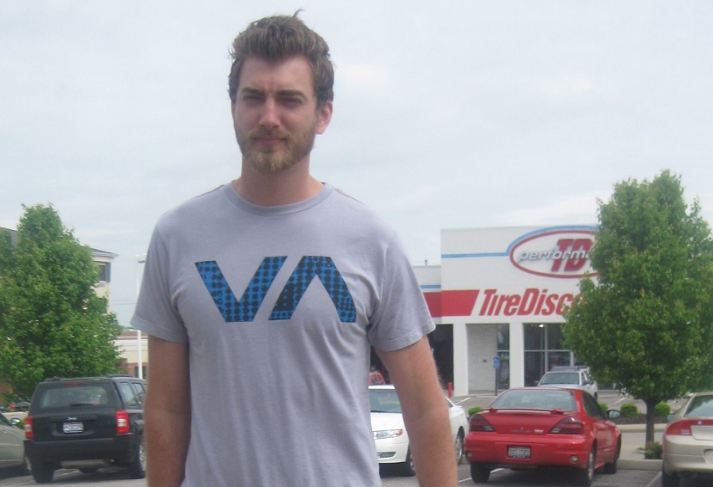 Rhett McLaughlin is a popular actor, comedian and YouTube personality from America. He is best known as one half of the duo “Rhett and Link” along with Charles Lincoln “Link” Neal. Together they make comedy videos on YouTube which gets millions of views.

Rhett McLaughlin was born on October 11, 1977, in Macon, Georgia, the U.S. He spent most of his childhood days in Buies Creek. Later, McLaughlin shifted to Los Angeles to pursue a career in video and content creation.

McLaughlin met his best friend Link Neal when he was in the first grade.

Both of them were in the same class and together they were punished by their first-grade teacher Ms. Locklear for writing a vulgar text on the school’s desk.

He went to the North Carolina State University where he earned his degree in civil engineering.

McLaughlin married his wife Jessie Lane in the year 2002 and together they are the parents of two children, Locke and Shepherd.

Rhett McLaughlin started his career when he joined the company “Black & Veatch’ after graduating from the North Carolina State University.

Later, he quit his job as an engineer and started his own YouTube channel “Rhett and Link” along with Link Neal. As of now, their channel has more than 4.5 million subscribers and has received more than 900 million views.

McLaughlin also owns a fourth channel “Mythical” which consists of behind-the-scenes videos. The most watched video on their channel is “My OCD (Song)” which has more than 40 million views.

In 2013, he launched the podcast “Ear Biscuits” on Soundcloud and iTunes.

He has also won the Shorty Awards in the category of “Best Podcast” and “Best Web Series” in the year 2016.

Rhett McLaughlin’s Net Worth & Salary in 2022

As of 2022, Rhett McLaughlin has an estimated net worth of more than $10 million. This huge wealth is the result of his successful career as a YouTuber, comedian, and actor. McLaughlin has appeared in many television shows including Lopez Tonight, Last Call with Carson Daly, The Tonight Show Starring Jimmy Fallon, and others. He has been a part of several commercials which have featured in The New York Times, CNN, Forbes, NPR, TMZ, and others. McLaughlin also hosts several live shows and festivals which also helps in increasing his net worth.

Rhett McLaughlin is one of the most renowned YouTube personalities in the world. He is among the very few YouTubers who have more than three channels with over 1 million subscribers.