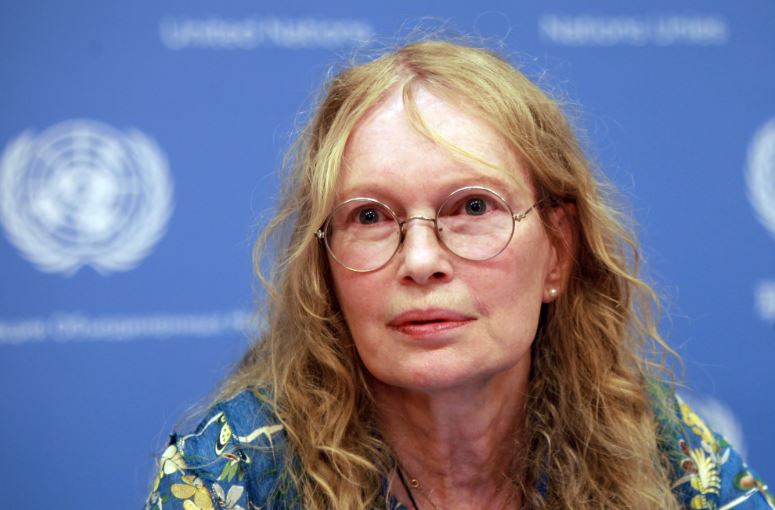 Mia Farrow is an actress, former fashion model, and an activist of the American origin. She became famous in the ‘Peyton Place,’ a television soap opera where she played the role of Allison Mackenzie.

Her official names are Maria de Lourdes Villiers Farrow. She was born in Los Angeles, California on 9th February 1945. She was the third born child in a family of seven siblings of actress Maureen O’Sullivan, and John Farrow, who worked as a film director.

She was raised in a Roman Catholic family, and she attained her primary and high school education in a Catholic convent. The acting career was in her blood as she made her debut in films when she was only two years old in 1947 when she appeared on ‘Tot Holiday.’ At the age of nine, Mia contracted polio and was placed in isolation for three weeks.

Farrow first got married when she was 21 years old to Frank Sinatra, a 50 years old singer in 1966. Their union did not last for long, and they divorced in 1968. Two years later, she got married to Andre Previn who was a music composer and conductor. The couple was blessed with three children, twins Sascha and Matthew on 26th February 1970, and Fletcher on 14th March 1974. The couple later divorced in 1979.

On the 19th December 1987, Farrow gave birth to another child named Satchel O’Sullivan Farrow. She has also over the years adopted many children. Some of the children they took when they were still together with Previn. She has a total of 10 adopted children.

Mia Farrow’s career started off when she was still a child. However, her debut credited film was ‘Guns at Batasi’ which was a British movie. Her career was picking up when she became a cast member in a television soap opera titled ‘Peyton Place.’ The soap opera spanned for two years, and Farrow starred in more than 263 episodes.

Mia has over the years appeared in several films. Some of the noticeable ones are ‘Rosemary’s Baby,’ which was a psychological horror movie and ‘Death on the Nile.’ Most of the films she appeared in were a big success. Lately, she has been credited for the ‘Dark Horse,’ a comedy movie.

Following her success as an actress, Mia has won over 30 awards and nominations in the span of her acting career. The accolades are a tremendous achievement, and she has become a real role model to the youth today.

As of 2022, The actress has over the years managed to accumulate a net worth of $65 Million. Most of her wealth is from her acting career. She was also a model, and she owes part of what she has today to her former profession. The wealth she made in the past has given her a comfortable life at present.

Mia Farrow can today be listed among the most successful actresses of all times. She began acting at a very tender age, and she managed to stay focused on the career for many years to come. Over the years, she has encountered a lot of challenges, but she stood firm and finally made it. We wish her all the best in future.