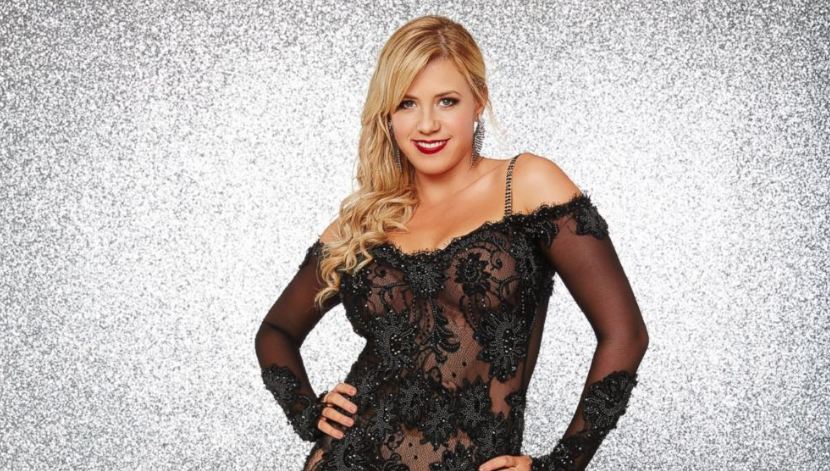 Jodie Sweetin is a popular American actress. She rose to fame due to her role as Stephanie Tanner for the popular TV series Full House. It was broadcast on ABC as a comedy series. She went on to play the same part in its sequel that was broadcast on Netflix. She has been in multiple TV films and the recent being My Perfect Romance.

Jodie was born on 19th January 1982 in Los Angeles. The unfortunate thing was that both her parents were in prison during her birth. Therefore, she was adopted by her uncle and his second wife. From her high school days, she showed interest in acting and performed in musical theaters. She went on to attended Los Alamitos High School and then to Chapman University in California.

At the early age of 20, Jodie got married to her first husband Shaun Holguin who was a Los Angeles Police Officer. However, after four years, they divorced and went their separate ways. Then she started dating Cody Herpin whom she met through a common friend. Within two months of dating, they got married in Las Vegas. They have a daughter named Zoie.

However, the next year, they filed for divorced, and it was settled in 2010. In the same year, she was expecting a baby with her boyfriend, Morty Coyle. They married in 2012 and got separated the next year. In 2016, Jodie announced her engagement with Justin Hodak and the next year; she announced separation.

When she was merely five years of age, she debuted in the acting role for the sitcom Valerie. She looked extreme cute and pretty, and in the same year, she was cast of Full House which was a comedy series. The series went from 1987 to 1995 and Jodie was a regular part of it for the character Stephanie Tanner. This is the only best acting role she has had. It was after the end of the finale that she graduated and attended University.

After that, Jodie hosted the second season of the Pants-off Dance-off. She was also part of a dark comedy film named Small Bits of Happiness which won the Best Comedy award. Jodie focused her career on doing independent films and appeared in Port City and Redefining Love. She was part of the web series Can’t Get Arrested in 20111. In 2012, she appeared in the TV film named Singled Out. This was when she took the oath to recover from her substance abuse. In fact, it is said that she never made it big because of her unsettled personal life and drug and alcohol addictions.

Jodie is currently part of the sequel of Full House named Fuller House on Netflix. She participated in 2016 Dancing with the Stars, and she finished in the sixth position. She won Young Artist Award for a comedy role in TV series in 1990. She was nominated for the same award in 1988, 1989, 1991, and 1993.

How much net worth do you expect from an actress who failed to hit her prime? Well, she has a net worth of $1 million as of 2022. Most of the money she earned from Full House for 12 straight seasons were lost in drugs, alcohol, and recovering from it. Apart from that, the independent films have been her regular source of income.

Jodie Sweetin suffered in her personal life by getting married and divorced multiple times. She hardly got time to focus on her career and was complacent about it. She started at a very early age, and she has the skills and the look. Yet, she failed to make it big and survived only due to the series Full House.