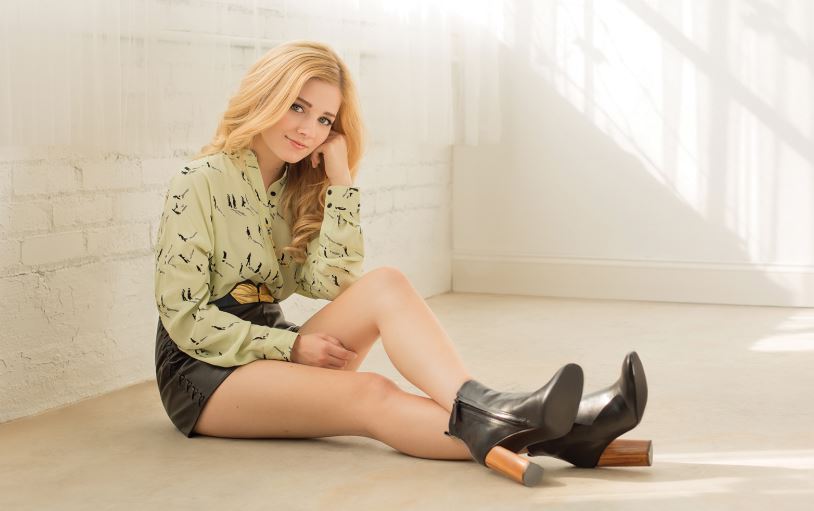 Success is normally associated with age, however a God-given talent starts from zero years to eternity. For the few people who are able to identify what they were born to do at a young age, they end up flying higher than they’d thought of. This is exactly what happened with Jackie Evancho, she was able to identify her gift and embraced every opportunity she got to showcase it.

Jackie Evancho was born in Pittsburgh, Pennsylvania, US on 9th April 2000 and her official names are ‘Jacqueline Marie Evancho’. She is the daughter of Michael and Lisa Evancho. She is a white American singer by nationality and ethnicity. Jackie’s older sister who is transgender is known as Juliet and her younger one is known as Rachel. She also has a younger brother by the name Zachary.

Her father Michael Evancho operated a video security business since Jackie was a young girl until 2010. She has been brought up in a Christian background as they are all strong catholic. Jackie and her family live in Pittsburg suburb. She started her school-life in Pine-Richard School District then joined Pine-Richland High School. However, because of her busy schedule, she switched to online schooling.

At her age, Jackie has learnt to keep her personal life very private. However, rumors have it that she has been in a relationship since 2016 and although no details of the boyfriend have come to the limelight, she seems happy with him. Recently Jackie said, dating is never a challenge as long as you get the right person which means she is happy with however she is dating.

Jackie started taking part local and national competitions when she was 8 years only. This is when her parents realized her gift and took her to voice lessons. She also started performing at events, nursing homes and churches mostly in Pennsylvania. She also joined Festival Chorus of Pittsburg which is now known as (Pittsburg Youth Chorus) and participated in its 2008-09 season. Jackie was also able to start her YouTube channel at a very young age.

Evancho’s career in music took a different turn in 2009 when she caught the attention of record producer David Foster. David Foster selected her for his “Hitman Talent Search Contest” regional semifinals where she finished as a runner-up. She got the confidence of doing a solo album which was released in November 2009 by the title ‘Prelude to a Dream’. This album mainly covers ‘classical crossover songs’ which include: “The Prayer, Concrete Angel’, To Where You Are, Con te partiro, and Amazing Grace.

After participating and emerging second on NBC’s America’s Got Talent fifth season, her fame rose tremendously to American audiences. She started receiving interviews in different shows and American Got Talent gave her an opportunity to perform in more than 10 cities during their Live Tour.

On 16th November 2010, Jackie released her first major album titled “O Holy Night” which made her the top-selling debut artist for that year. After the success of this album, she has released many more full-length albums which include: ‘Dream with Me’, ‘Heavenly Christmas’, ‘Songs from the Silver Screen’, ‘Music of the Movies’, ‘Awakening’, ‘Two Hearts and ‘Someday at Christmas’ among others.

As young as she is, Jackie Evancho has a net worth of $5.5 million as of 2022, which is bound to change as she hasn’t reached the peak of her career yet. The major source of her is music and the various concerts she holds as a way of promoting her albums. However, she is also into acting and modeling and has appeared in a number of television episodes like; ‘She’s Out of My League’ and ‘Back to Max’ among many others.

Jackie Evancho is a talented singer who has been embraced by many as “an impressive thing to witness”. However, she has also suffered some criticism from some artists who feel she still has a long way to go before she gets to where she ought to be. She has however received a number of honors for demonstrating humility and politeness with all her fame.