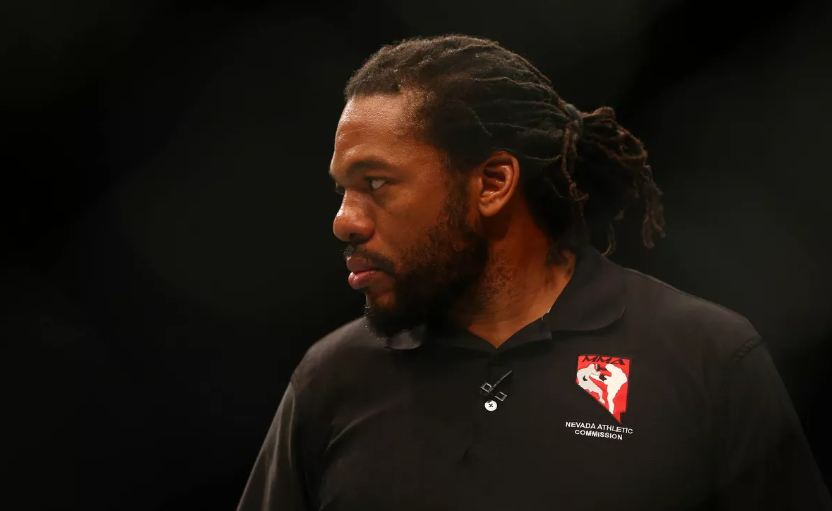 Herb Dean is a former Mixed Martial Arts Fighter, who serves as a referee in UFC nowadays. He is regarded as one of the best referees in UFC by many including UFC President Dana White.

Perhaps you know a thing or two about Herb Dean, however, how well do you know about him? For instance, how old is he? How about his height and weight, moreover his net worth? In another case, Herb Dean might be a stranger, fortunately for you we have compiled all you need to know about Herb Dean’s biography-wiki, his personal life, today’s net worth as of 2022, his age, height, weight, career, professional life, and more facts. Well, if your all set, here is what I know.

Herb Dean was born on September 30, 1970, in Pasadena, California, United States. He developed an interest in martial arts at quite a young age and started to learn Judo and Jiu-Jitsu. Apart from martial arts, Dean is said to have a love for cars, and he likes to work over remodeling his own cars.

Dean Herb is married to a Russian Woman, and the couple has three children, two daughters, and a son. Dean has not disclosed their names or the name of his wife in public. It seems that he is a guy who wants to keep his family out of the limelight so that they can enjoy the life of a common man.

Dean Herb started his career as a fighter in the year 2001 in Mixed Martial Arts. He competed in the heavyweight category and had fought five bouts so far from 2001 to 2007. Out of the five fights, he has won two and lost three. His first fight was against Randy Halmot in the Gladiator Challenge 6, held on September 9, 2001, at Colusa, California. He won the bout by submission in the first round.

He lost his second fight to Joe Riggs at the Rage in the Cage 43: The Match event held on January 18, 2003, at Arizona, the US by submission in the first round. Dean’s third bout was versus Timothy Mendoza at the KOTC 39: Hitmaster fought on August 6, 2004, at San Jacinto, California. He won the fight in the second round by TKO. In 2006, he fought his fourth fight at the Spirit MC 9 event against Jung Gyu Choi in South Korea, which he lost by submission in the second round. His final fight was held on July 14, 2007, in London for the Cage Rage 22 event. He lost against Dave Legeno by TKO suffering an eye injury in the first round.

Dean debuted as a referee in the year 2004 and till date, he has officiated for about more than 4000 matches. One of his famous matches includes the match between Tim Sylvia and Frank Mir in which he called to stop the fight in the first round after noticing that Sylvia’s arm was broken. Though Sylvia refused to accept it during the fight, he later thanked Dean for stopping the fight and saving him from a career-threatening injury.

He was publicly praised as one of the best referees of the UFC by its president Dana White, commentator Joe Rogan and other magazines and television channels. Herb won the World MMA Referee of the Year Award consecutively five times for the years 2010, 2011, 2012, 2013, and 2014.

Apart from fighting and refereeing in UFC and other MMA competitions, he has also acted in movies such as Here Comes the Boom, A Violent Man, and TV series The Ultimate Fighter which has amassed him a net worth of $2 million as of 2022. His annual salary for refereeing in UFC is said to be around $500,000.

Despite enjoying a mediocre career as an MMA fighter, Dean has emerged as one of the best MMA referees in history saving many fighters from suffering career-threatening injuries. Though referees have been on the headlines for their bad decisions all over the world in various sports, Dean’s decision has been criticised only once so far in his career, which is quite an enormous feat to achieve.