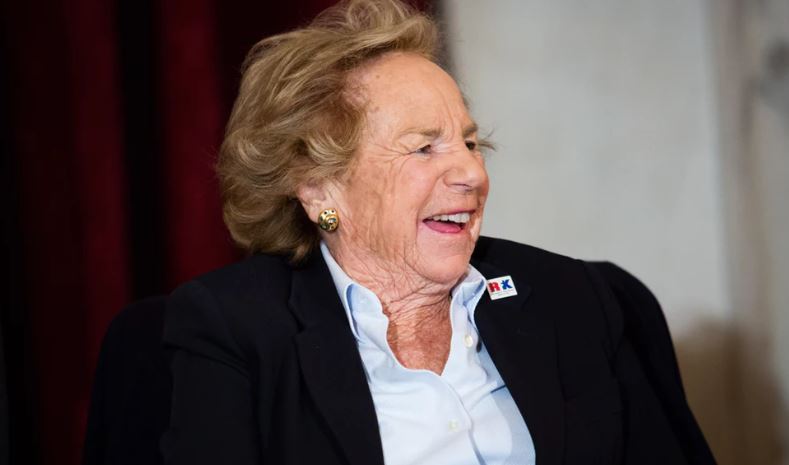 Ethel Skakel was born on April 11th in the year 1928, in Chicago, Illinois, the United States to George Skakel and Ann Brannack. Ethel has five elder siblings and one younger sister who were all raised in Greenwich, Connecticut.

She did her schooling at the Greenwich Academy and the Convent of the Sacred Heart and joined the Manhattanville College in 1945. Ethel was the classmate of Jean Kennedy, and she first met Robert F. Kennedy in Quebec during a ski trip. Robert initially dated Ethel’s sister Patricia and after their relationship came to an end, he started dating Ethel. Her parents died in a light plane crash in 1955.

Ethel and Robert became engaged in February 1950 and got married in June 1950. They lived in Charlottesville, Virginia was Robert was studying at the University of Virginia Law School. The couple hosted many gatherings at their luxury home and was sent for a goodwill trip to 14 countries by President Kennedy in 1962. Sirhan Sirhan wounded Robert on the midnight of June 5, 1968, and he died the following day. The day was declared as a national holiday and Ethel was pregnant with their 11th child at the time of his death. Ethel announced that she would never marry again after her husband’s assassination.

Ethel founded the Robert F. Kennedy Center of Justice and Human Rights, a non-profit organization that strives for human rights in the US in October 1968. She has done a lot of civil services after that and endorsed Barack Obama during the 2008 Democratic Party Presidential Primaries.

She was bestowed with the Robert F. Kennedy medal in 1981 by President Ronal Reagan, and in 2014 a bridge across the Anacostia River was named after her as the Ethel Kennedy Bridge. Obama also awarded her the Presidential Medal of Freedom in 2014.

In 1956, she bought a luxury house along with her husband in Hickory Hill with 13 bedrooms and 13 bathrooms which built on 6 acres. The house was sold for $8.5 million in 2009. Most of the wealth she enjoys is inherited from her parents and her husband, and her net worth is estimated to be $55 million as of 2021.

In 2012, a documentary titled Ethel was directed by her youngest child Rory which portrayed her marriage life and political awakening. It was premiered at the Sundance Film Festival.